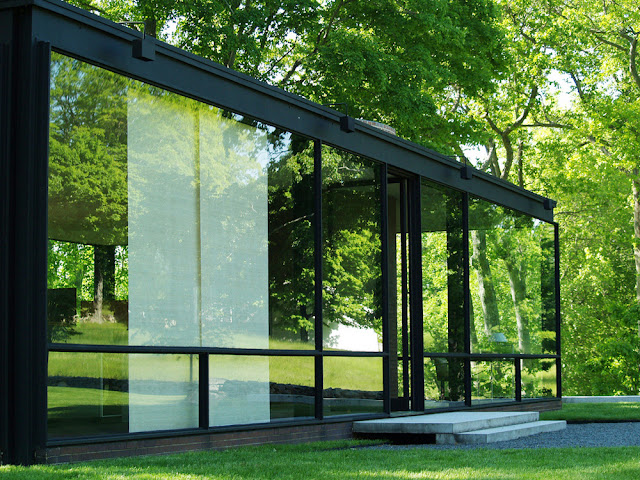 The Glass House offers very little privacy, even on such a large estate, so Johnson built a second building at the same time, one that is predominantly solid. (Skylights and windows facing north bring in natural light.) The two buildings face each other across a well-manicured lawn, a surface that reinforces the Glass House as being a pavilion, a statement in the landscape.

The Glass House is built of three main materials: glass, steel (painted black) and brick. The glass panes are large (about 8 feet tall and 13 to 17 feet wide), but they don't quite reach from ceiling to floor. Smaller panes at the base provide a modern version of a chair rail at the perimeter, but they do not include operable vents; doors in the center of each elevation would have to be opened to naturally ventilate the interior. 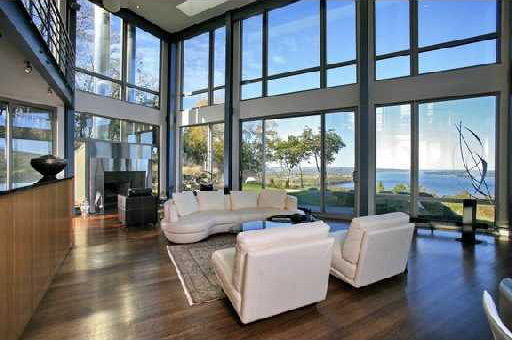 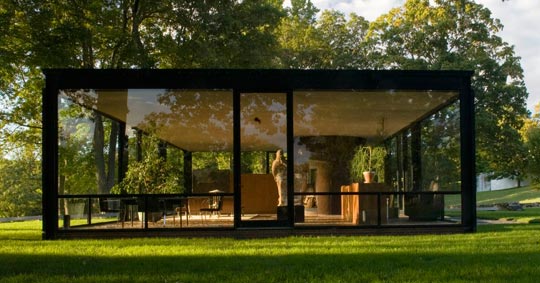 The steel is carefully articulated to blur the distinction between structure and framing. Unlike the Farnsworth House's clear sense of structure, the Glass House appears to be a roof propped upon glass walls and framing.


The third material is brick, which is used for the floor and a bathroom enclosure that also acts as a hearth (next photo). The herringbone pattern on the floor creates some ambiguity between inside and outside, especially as it is always seen with the lawn extending from it on all sides. 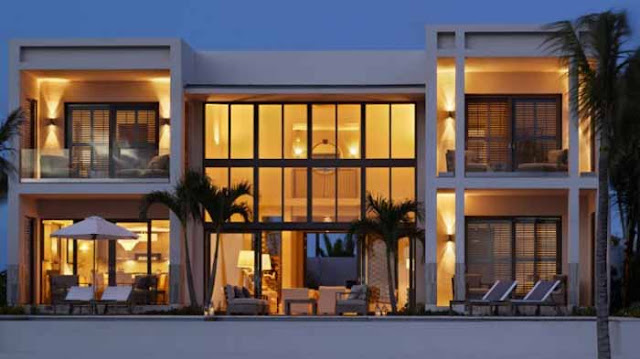 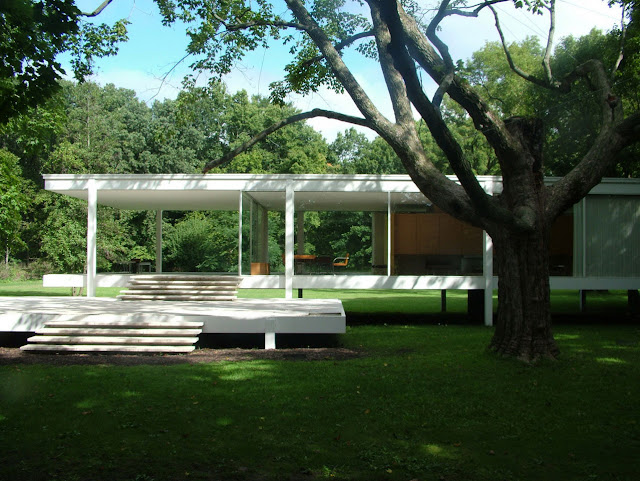 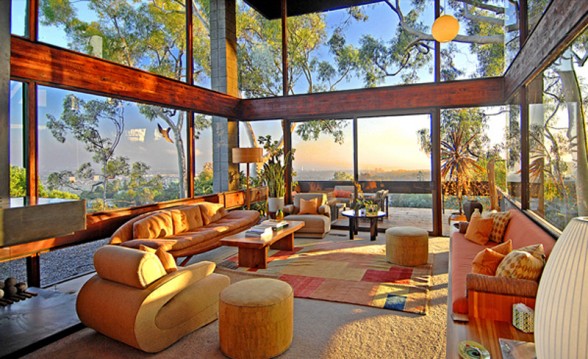 The interior of the Glass House is completely exposed to the outdoors except for the a cylinder brick structure with the entrance to the bathroom on one side and a fireplace on the other side. The floor-to-ceiling height is ten and a half feet and the brick cylinder structure protrudes from the top. The floor is also made of red brick laid out in a herringbone pattern and is raised ten inches off of ground level. The only other divisions in the house besides the bathroom are discreetly done with low cabinets and bookshelves, making the house a single open room. This provides ventilation from all four sides flowing through the house as well as ample lighting. 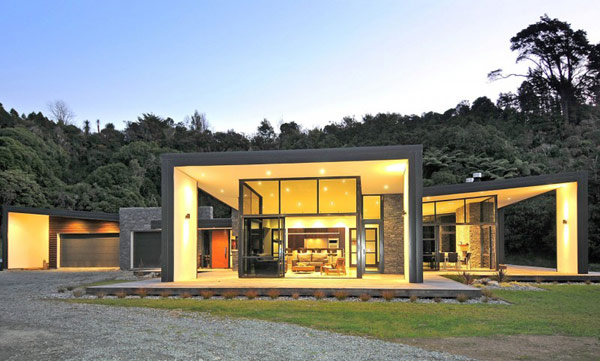 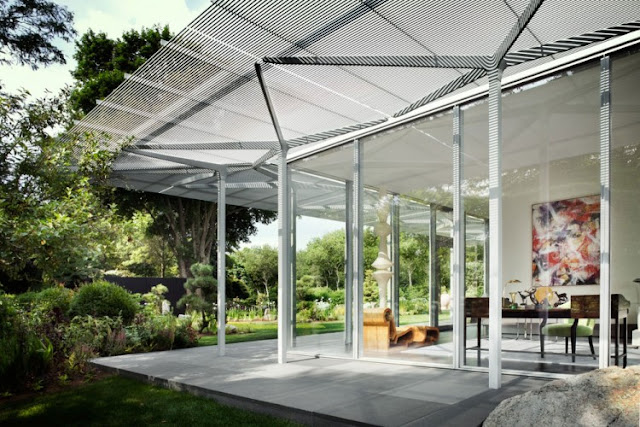 Although the house is the primary attraction on the site, Johnson used the expansive land around it to allow his imagination to run and build thirteen more structures that include a guest house, an art gallery, and a sculpture pavilion. The guest house, connected to the Glass House with a stone path that lays over the expansive lawn immediately surrounding it, is a heavy brick structure, contrasting the extreme lightness and transparency expressed in the Glass House. The art gallery is buried underground in order to not take away attention from the house, making it windowless which is uncommon for a gallery. Wright’s other notable experiment on the site included a sculpture gallery which is “an asymmetrical white-brick shed with a glass roof…conceived as a series of interlocking rooms that step down around an open, central space.” 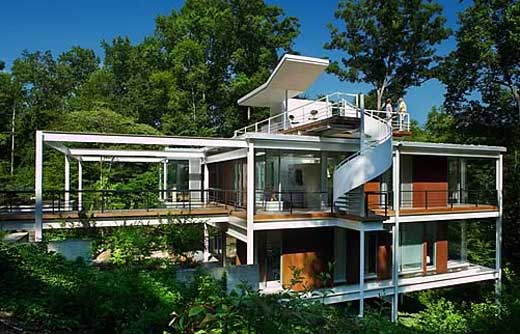 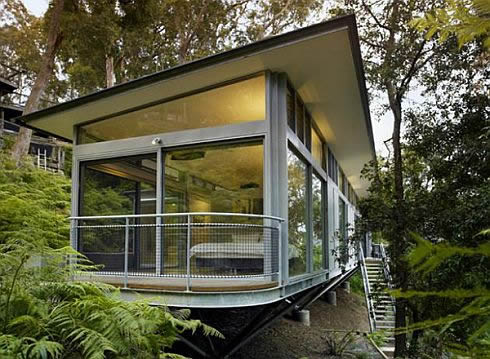 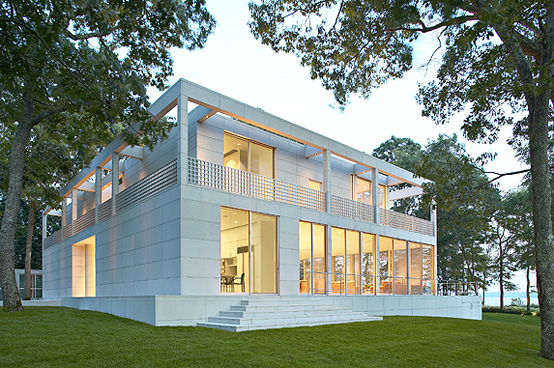 Declared a National Historic Landmark in 1997, the Glass House is still considered a modern marvel. The beauty in its composition along with the rolling landscape have people travelling to visit and experience it firsthand every day, and with the lines of the Glass House and the other buildings smoothly blending in with the lines of the horizon and the surrounding landscape, one can feel a breathtaking sensation of endlessness.
Posted by Unknown at 7:09 AM